"It's Just A Detour"- A Mindset Shift for Breaking Habits 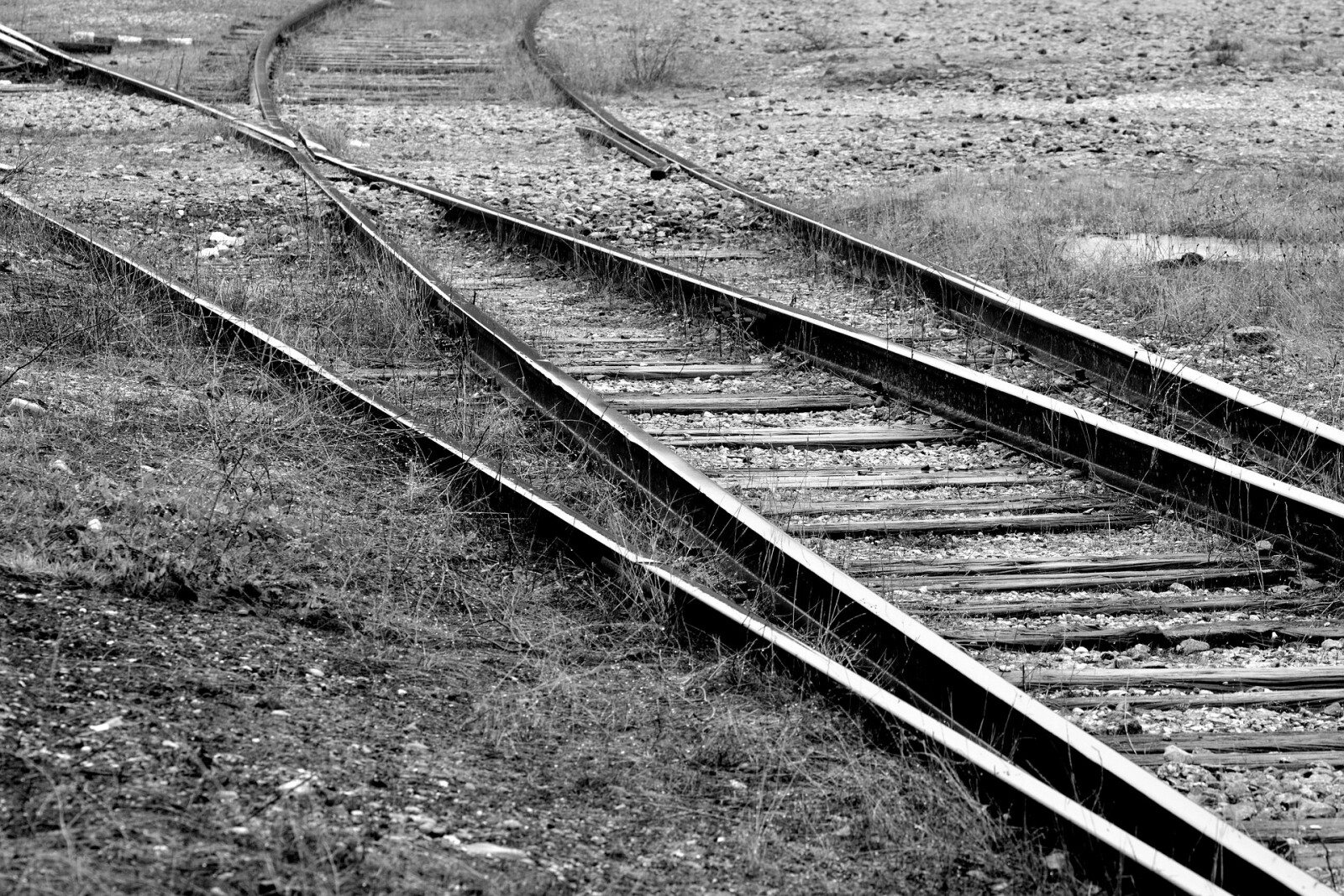 This week, I started a new journey.  Naturally slim most of my life, middle age has caused my metabolism to slow and the pounds to begin accumulating.  After going up two pants sizes and starting to see my BMI creep ever closer to overweight, I decided it was time to change the bad eating habits I've ignored for years.
Bad news, though-apparently when you've been drinking HUGE sodas multiple times a day for literal YEARS, it can be a bit hard to quit.  I have gone up and and down and tried a million things.
This last week, I switched to diet sodas and simply tracked my calories.  So far, this working because it's made me very conscious of what's gone in my mouth.  And for a couple of days I did very well, but…...
Today is Saturday.  It's day 1,102,393, 023 (or whatever) of quarantine.  My kids are in my business, I can't get anything done, everyone is whiny and bored, and I'm tired.  So I ate what I wanted, and I drank WAY. TOO. MUCH. SODA.
I feel gross, defeated, and like I'm never going to overcome this monster.
However, I just had a conversation with a friend that I rushed to blog about because I felt like it hit on a very important mindset shift that I hope everyone hears.  As I complained about how hard I fell off the wagon today, I realized something. From somewhere inside of me, a voice told me that  I did really well most of this week.  Better than I think I've ever done at working towards change.  "Yeah, today sucked," I told my friend, "But it's just a detour. And tomorrow I'm going to get back on the road."
"It's just a detour."   Why was this such a fundamental mindshift for me?  Well, when you take a detour, you just take a side trip that takes you off the road for a little bit.  But ultimately, you're still going the same direction.
Too often, I think that when we set out to do something new, and we fail, we see it as a wrong turn.  You're off course, off track, and going completely the wrong way.  When you do that, you'll never get there.  You have to turn around, go back to the beginning, and start all over.  That's so defeating!  No wonder we just give up and stay where we are.  So what would happen then, if we decided to see the mistakes we make on the way to our goals as just "detours."  Things that took us off the road for a bit, but once they're over, we get right back on.
Do you have an ongoing battle you're fighting?  Something you'd like to do but haven't quite achieved it?  What held you back?  Think through that situation and be honest with yourself-did you think that failure meant you couldn't do it?  Now imagine that wasn't a failure at all.  It was simply a little side trip.  You were going in the right direction, and you had to stop for a minute-but now you're getting right back on and heading out.
I believe in ya!
Angie

What to Do With your Patch Test Results 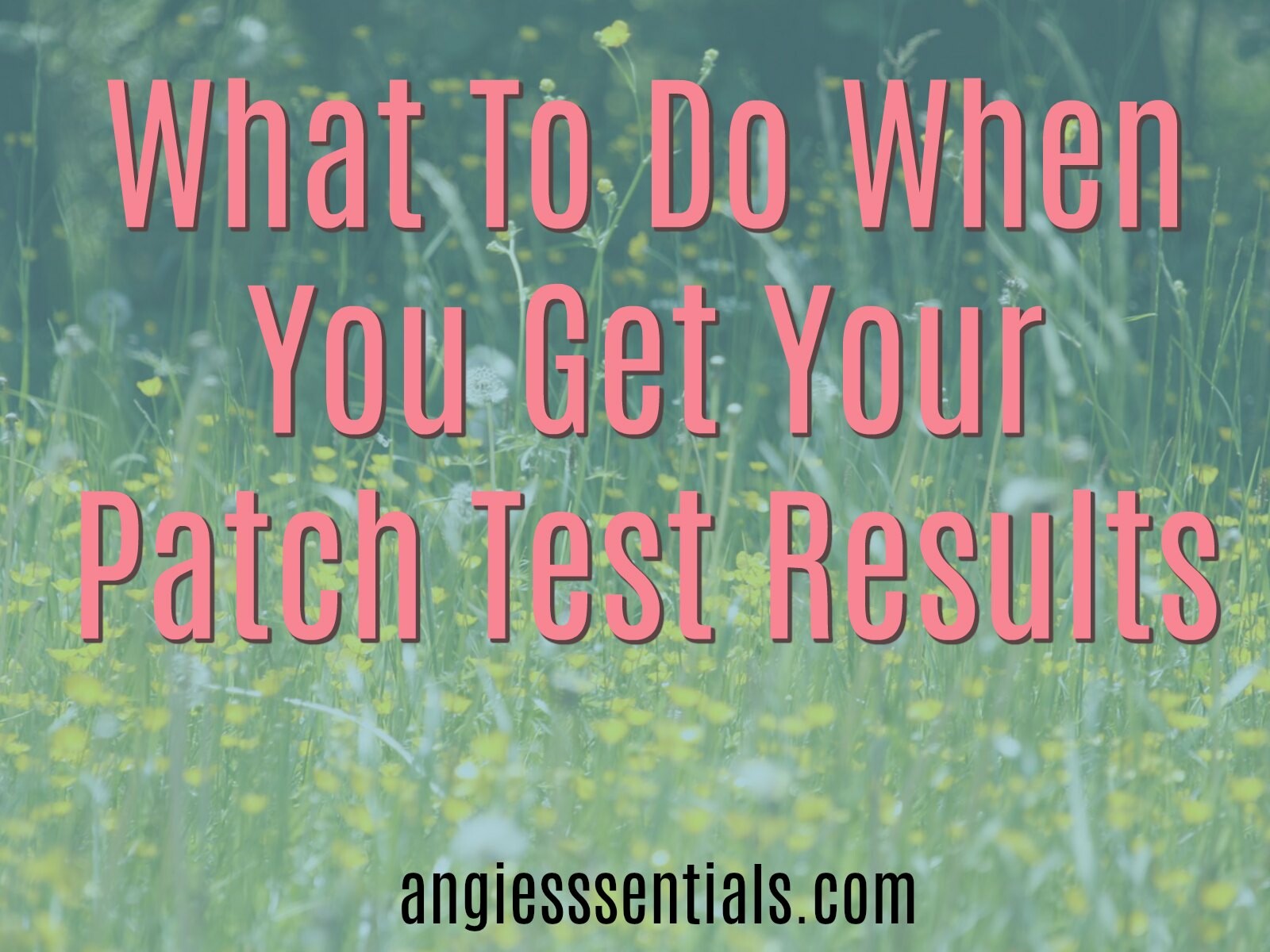 This summer, my 6 year old daughter underwent patch testing (more details on that here), and we found out she was allergic to about 6 common chemical ingredients.  Among these were formaldehyde, propylene glycol, and orange and blue textile dyes.  Basically, this was the answer to years of struggling to get rid of her itchy skin patches.  But when it was complete, her doctor walked in and handed me a fact stack of paper.  Friends, these ingredients were in EVERYTHING (or so it seemed).  So now what?  Here's my best tips for how to handle your patch test results.

I know it's overwhelming.  I know it seems like these things are in everything.  But don't panic, you WILL come out on the other side, and it WILL be ok.  Take a deep breath, a walk, or a nap.  Grab your Peace and Calming oil and breathe deeply.  Whatever you have to do, it will get done.  Don't panic.

Trying to eliminate source of your allergens at once can be overwhelming and costly. When we got our results, there was a lot to take care of. Clothes, medicine, foods, soaps, shampoos, lotions-pretty much everything we were putting on and around our daughter had to be replaced.  How you do this depends on your level of discomfort-for my daughter, these things had caused itchy patches that were annoying but could be controlled.  They didn't affect her daily life in a major way.  Because of this, we were able to work on making small changes, one at a time, until we had eliminated all the problem causing issues in our home.

I would suggest tackling the most used items first.  For instance, with our daughter, propylene glycol turned out to be in her allergy medicine, the steroid cream we applied to her itchy patches, and the lotion we used to try and help her skin.  So basically, everything we were using to control her allergy was actually causing it.  Just changing those few things made an immediate difference for the better.  Then we were able to take our time phasing out the rest.

Find a company with products you can trust.

There are lots of great companies out there that have made commitments to use chemical free ingredients for their products. For us, this started our journey with Young Living.  Young Living has a great blog post detailing ingredients you'll never find in their products.  Many of these were synthetics that my daughter was allergic to.  Their Essential Rewards program allowed me to get products delivered monthly to my door and earn points back towards free things.  For me, this sealed the deal.  It was nice to know there was one line of products I could trust for everything, without having to walk through Target and scrutinize labels.  Do your research, you'll find yours.

I hope this post is helpful.  Remember that your patch test results is just the first step-and it's the step that will lead to you getting well!  So stay positive, and baby step your way to better health.

I'd love to connect with you and hear more about your journey.  Come join my Facebook group for more natural living tips and tricks and a great community vibe.  See you there!

Our Journey With Patch Testing 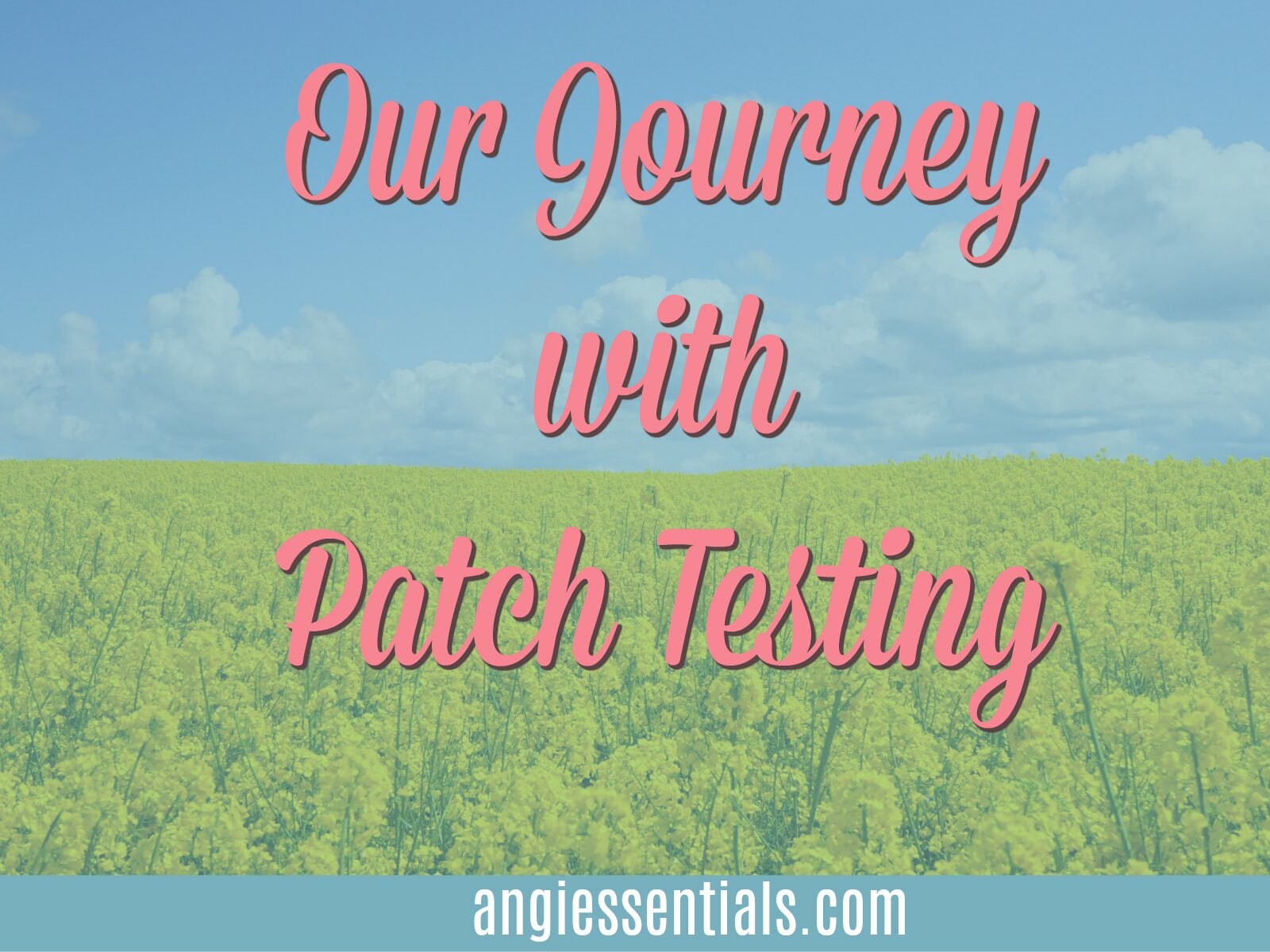 When my oldest daughter was born, I learned very quickly that she had sensitive skin.  I LOVED the baby lotions, baby shampoos,  ALL the things that made my sweet baby smell clean and fresh.  But I quickly realized that none of those things agreed with my baby's skin.  I threw all of them out and started over with the non fragranced "organic" stuff I could find on the store shelves.

Despite the change of products, my daughter continued to struggle with what the doctors said was eczema.  Several pediatrician visits resulted in a referral to a dermatologist who recommended several different kinds of creams.  None of them totally got rid of the problem.  Then back to the pediatrician, for another referral, this one to the allergy specialist, who did traditional allergy testing.  She revealed allergies to several kinds of environmental allergens, so they placed my daughter on a cocktail of allergy meds and lotions and creams.

Again, the problem never fully disappeared.  I'd be very vigilant for several days with applying steroid creams and lotion to her itchy skin, the red patches would go away, and then I'd relax.  And they'd come back.  Finally, after a couple years of this and when my daughter reached 6, the doctor suggested patch testing.

Patch Testing to the rescue!

Patch testing is a process of testing the skin for allergies to chemical compounds that are common ingredients in the products we come in contact with every day.  This whole process really opened my eyes to the things that are in practically everything we use.  My daughter was tested for almost 80 synthetic ingredients, and she came back allergic to about 6 of them.  Among these were propelyne glycol, formaldehyde, black rubber mix, and blue and orange textile dyes.  The doctor came in after the testing, handed me a stack of paper, and I started to panic.  These ingredients were in EVERYTHING and THEY HAD MORE THAN ONE NAME.  I was so overwhelmed-how was I ever going to eliminate them from my home?

For advice on what to do next, check out the next post in this series, where I go in to depth a bit more about how I cleaned our home up in the wake of this testing. My number one piece of advice to you would be: don't panic.  If you or someone you love is facing patch testing, the answers to some very frustrating questions are on the horizon.  There ARE good products available without the junk that causes issues.   And if you are a person or a momma with a child who has skin issues that just don't seem to clear up, ask for patch testing.  You'll be surprised what might come up!

If you have questions or want to connect, I'd love to hear from you! Leave me a comment below or fill out my contact form.

"It's Just A Detour"- A Mindset Shift for Breaking Habits

What to Do With your Patch Test Results

Our Journey With Patch Testing

Helpless is the worst feeling as a mother.

When I found I was pregnant I did what most of us do: I read all the books, bought all the things, made all the plans.  I was determined to give my kids the BEST of everything.

When it came to baby products, I used what everyone else was using.  It’s right there on the aisles for us to buy, right?  If everyone is doing it, it must be ok.

Fast forward a few years, and here we are.  I’m standing in the bathroom, helplessly watching my daughter cry and scratch.  Her skin is broken out in red patches, she hates this whole routine, and the meds, creams, and lotions really aren’t doing much more than putting a bandaid on the whole problem.

It was then we discovered that the ways we treated the problem WERE the problem.

So I went looking, and found incredible products I could trust, from a company that showed me it’s source.

I don’t have to feel helpless anymore.

Now, I’m on a mission to help other moms who are in the same boat.  Better products can be EASY and AFFORDABLE.  Come join our beautiful community of like minded mommas for more education on ways you can use cleaner products in your home.

Ready to get started?  Message me here for more information!